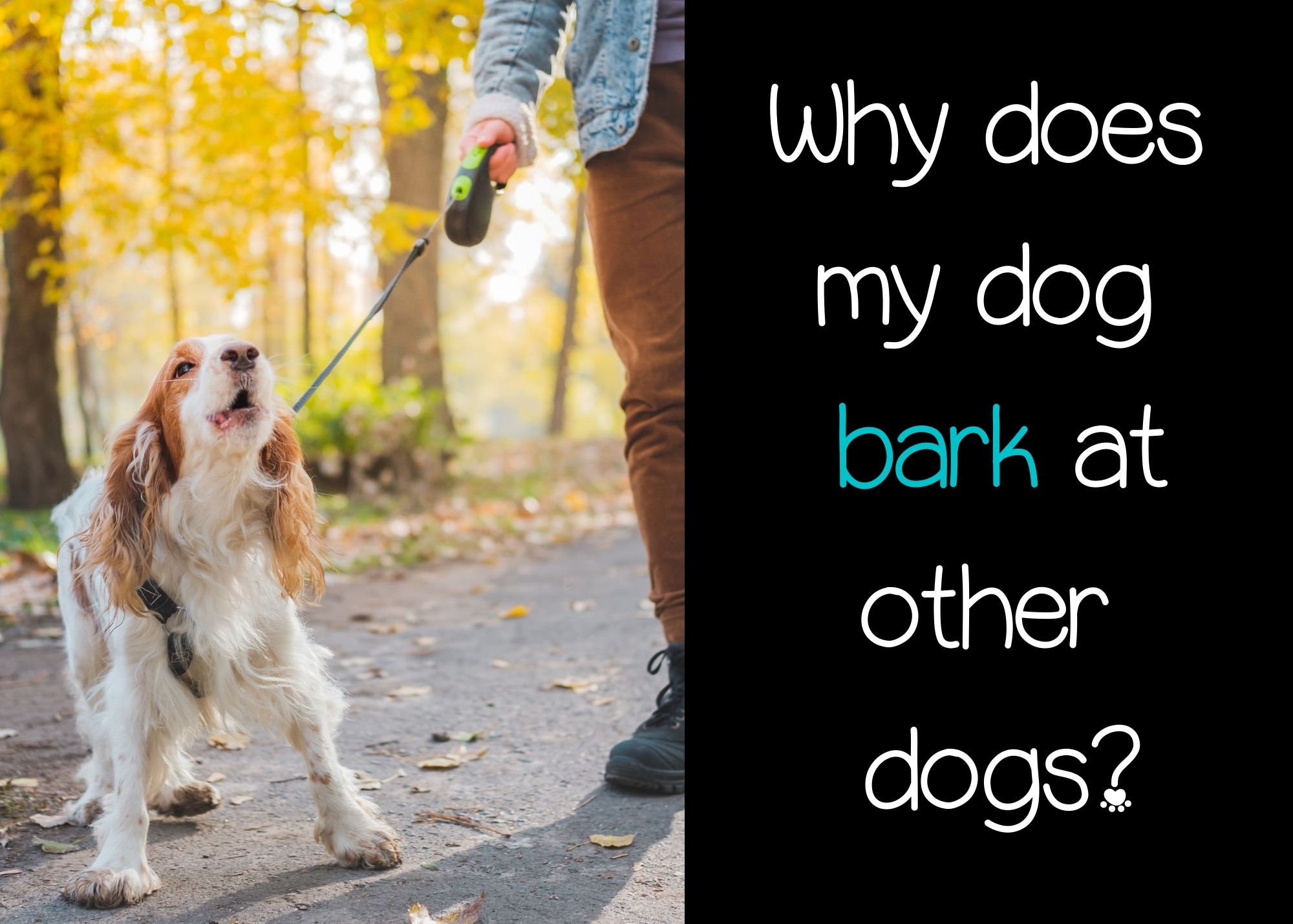 “Why does my dog bark at other dogs?” It’s a question you might be asking yourself!

If you’ve found yourself asking this questions… “Why does my dog bark at other dogs?” then you’re not alone. It’s a common problem with dogs of all ages.

We know how it goes… You’re having a nice relaxing walk through the park, when suddenly your dog goes haywire! You look around for the source of the upset, and it turns out to be another dog. It’s a common situation. Suddenly you find yourself on Google, searching for ‘”Why does my dog bark at other dogs?” and hoping to find an answer.

Now, if you’re a new dog owner (or even a seasoned owner!), then this behaviour may cause you to get upset – and for good reason! Dogs barking at other dogs is often reactive and can seem aggressive, and the more it happens, the harder it is to control.

Ready to find out “Why does my dog bark at other dogs?” Let’s dive in!

Their bark in this situation isn’t necessarily aggressive, but a warning bark to other dogs to keep a distance. It could be a sign that your dog is wary of other dogs and feels a bit scared. Positive treat reinforcement (when your dog is not barking but close to dogs) can be helpful for this. So eventually your dog begin to associate other dogs with treats, rather than with fear.

Another reason for why your dog may bark at other dogs is down to frustration. When your dog is young, they will usually be all about checking out other dogs. Usually, when dogs are puppies, they will be allowed to do this as they’re in the exploration stage!

However, even though they’re getting older, they might not have grown out of this phase. As they’re on a leash, if try to run over to a dog to say hello they’ll be stopped by you reigning them in. This is certainly the safest thing to do, but they may bark and lunge at other dogs out of sheer frustration because they want to be able to say hello and explore.

It’s really all about their behaviour being changed, so training is key here.

When asking “Why does my dog bark at other dogs?” it’s important to know that barking is a natural response for dogs, and often times, if a dog feels a little unsafe around another dog, barking will be their first communicative response.

You may not know this, but dogs walking directly towards another dog is a no-go in the dog world as they see this behaviour as threatening. As humans, we find this a bit weird, but it is what it is!

Realistically, it’s almost impossible to avoid this happening on a daily walkabout with your dog. Sidewalks are designed to allow people to walk in two directions, so your dog is going to encounter a head-on approach at some stage in their lives!

As you’ll be in quite close quarters with any dogs and owners you pass, it’s best to try and keep your dog on the opposing side of any passing dog. This may not always be possible, so if it’s not, keep your pup as calm as possible when passing. With time and training, this scenario won’t feel so threatening to your pooch.

If your dog hasn’t spent any time around other dogs, then it’s understandable that they’ll have no idea how to react to other dogs. Whether they bark due to a perceived threat or just get overexcited, a lack of socialisation in dogs should be addressed where possible. This reason is related to the “fight or flight” response that we’ve already mentioned, as dogs on leads sometimes feel as though they’re physically trapped when faced with a threat.

Of course, these dogs that you pass aren’t a threat to you or your dog. However, dogs with no prior socialization will often act aggressively around other dogs which causes them to bark and lunge. When asking yourself… “Why does my dog bark at other dogs?” this is something worth investigating and thinking about.

They want to play

Another thing to remember when asking “Why does my dog bark at other dogs?” is that they could just want to play! Lots of people assume barking is a negative thing, but it isn’t. It’s actually your dogs way of vocalising and expressing their feelings. Lots of dogs (especially puppies) will bark at other dogs when they want to play. Usually this kind of barking is high pitched, and will be accompanied with a playful post (bottom up, paws down, tail wagging).

When asking “why does my dog bark at other dogs?” it’s important to consider that they might not be full trained. Before you freak, this may not be your fault! If you’ve been aware of your dog barking at other dogs for a while, you have probably already tried to stop their barks. However, as with all dog behavioural issues, there isn’t a one-size-fits-all solution.

Inappropriate training techniques can make your dog’s behaviour worse. If you’ve been shouting at them out of frustration or trying to forcibly correct their behaviour, they might be retaliating or reacting out of fear. Usually, kindness is key in these situations – so remain patient and just keep going.

If you keep all interjections calm and measured, you should be fine!

How to stop your dog barking at other dogs

It’s important to try and stop barking at home. Your dog is probably barking at other dogs because they’re upset, so the best thing to do is to tackle these behaviours in the comfort of your own home where they feel safest.

If you have any friends with dogs, then it’s a good idea to get a gathering going where you can gently introduce your dog to other pups. Treat lightly here, but if your dog reacts positively you should absolutely heap praise onto them and get the treats out! This reinforces positive interactions with other dogs and proves that barking is not the way to go.

Okay, so this one might seem obvious, but one of the best ways to stop your dog barking at other dogs is to just get away from the situation. It will probably make you feel a bit weird, but you literally need to get your dog out of there as soon as you can to calm them down. Moving briskly is a bit difficult when your dog is upset, but some positive reinforcement and treats should help you motivate them to move quickly from a situation.

Breaking a habit is one thing, but removing the situation completely is another – and often the best course of action. This might mean taking a slightly longer route home, but it’ll also mean keeping your down calm too – which is good for them.

If you aren’t getting anywhere with more conservative methods, then you might want to take your dog for some behavioural therapy. The endgame here is to get your dog more comfortable around other dogs and better handle their triggers when in public.

Ideally, you want to teach your dog that good things happen when they’re around other pups! After all, fellow dogs are not the enemy here and it’s important that your dog becomes aware of that as soon as they can.

We hope that this guide has helped you to figure out why your dog barks at other dogs.

Have you successfully conquered this element of bad behaviour? If you’ve got any tips and tricks, let us know in the comments below!

PoochingAround is a participant in the Amazon affiliate program, meaning we earn by advertising and linking to amazon.co.uk at no additional cost to readers.