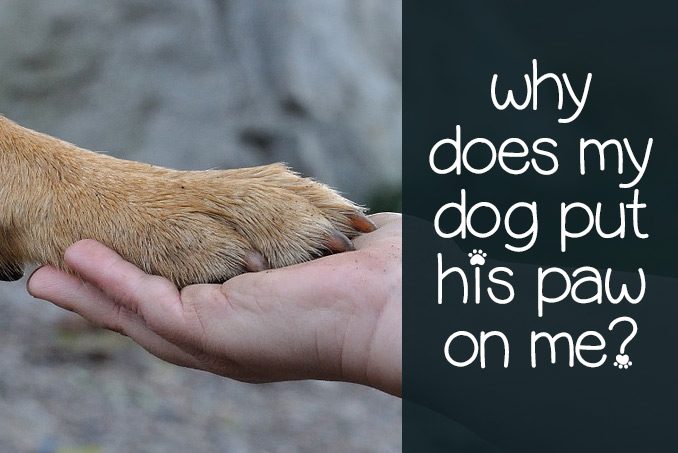 A dog putting his paw on you is a form of communication. Obviously, we cannot speak to our dogs although proper training gives them a good understanding of our commands. Your dog cannot verbally speak to you. Instead, your pooch relies on body language and certain sounds that he makes to convey a message to you. It can be difficult to decipher your dog’s language in the beginning but it is definitely doable. Here are a few reasons why your dog is putting his paw on you.

It is important to read the body language and any possible noises that your dog makes when putting his paw on you. This will give you the most complete picture of what your pooch is trying to say. Keep these things in mind the next time your dog puts his paw on you.

Dogs are social creatures, just like us, and they crave interaction with their family. Sometimes, when a dog puts his paw on you, all he wants is some attention. Maybe you’ve been especially busy that day and haven’t given Bello the same amount of attention as usual.

Another reason he might want attention is if you are interacting more with other humans or other dogs. Dogs like be included in all the activities of their pack. If you are doing something that doesn’t involve them, then your pooch might want in on the action. Him giving you his paw is his way of asking to join in.

To recognize this form of communication, read your dog’s body language. Is he focused on you? Is the pawing continuous? Does the pawing stop when you do give him attention? Especially the last one is a sure sign that your dog just wants you to acknowledge him.

He Wants To Play

Pawing is a behaviour you might have seen before among puppies. Young dogs are extremely playful and pawing each other is a way of showing they are interested in playing. Since this is a natural instinct for them, dogs will use the same body language when they want to play with humans.

Another sign that they want to play is the position of their body. Dogs that want to play will lower their head to the ground by their feet while simultaneously raising their behinds up in the air. This isn’t them copying your yoga pose. This is them signalling that they want to play. Perhaps this explains why your dog gets excited when he sees you practising yoga.

If your dog paws you and takes on his downward facing dog pose, then get ready for some playtime. It is important that dogs receive enough exercise and mental stimulation so save a a few minutes for play.

A dog that is pawing at you can also be a sign of distress. If this is the case, you might notice other signs like a soft whimpering, your dog lowering his head or a limp tail between the legs. Together with the pawing, these are all signs that your dog is upset about something and is looking to you for help.

There are several events that can bring on this type of behaviour. Perhaps it is a crowded space and the noise and movements is scaring your dog. Another reason could be a missing family member or the opposite, a new addition to the family. Hierarchy of the pack, this includes the humans, is important to dogs. When there is a change in the pack they might get confused.

It is important to slowly introduce changes to your dog. Let him acclimatise to new situations. Also, noisy spaces with a lot of strangers can make your dog anxious so in such situations it might be best to keep your separated in a comfortable environment.

Dogs can get a little cheeky sometimes. Sometimes, doing something naughty is just too attractive to ignore. However, a dog also knows very well when he is not supposed to do something. Pawing at you after doing something he should not have or after having been scolded at can be his way of trying to win back your approval.

How To Prevent and Stop Pawing

There is something quite endearing about a dog that paws you. However, there are instances when a pawing dog is not ideal. Having a large breed dog paw you repeatedly can be quite heavy or even dangerous for small children that cannot withstand the weight. A paw is also less cute when it is dirty and muddy. You don’t want that on your clothing.

If your dog associates pawing as positive behaviour he will use it even when not commanded to do so. It is your responsibility to not reward this behaviour. Simply ignore it. Your dog will slowly realise that this form of communication is not effective and stop.

Start early with teaching your pup not to paw at you. It will take more time to unlearn a habit then to instil the desired habits from a young age. You don’t need to punish your dog for pawing though. A stern ‘no’ or ignoring should be enough to keep his paws at bay.

Do you recognize your dog’s behaviour in any of these options? Actually, dog language is a very simple form of communication. You just have to recognize the patterns and react accordingly. Now, you will know what to do when your dog paws at you. 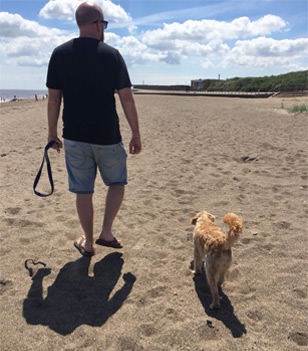 This site is run by Mike and Simon who are both massive dog lovers. To read more about us please read our about us page.

Scroll back to top